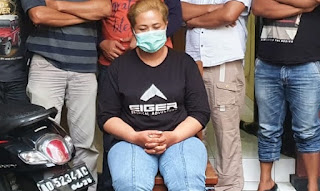 The Banguntapan Police, Bantul, Special Crime Investigation Unit arrested a woman who was a boarding house specialist. The suspect with the initials EP (40) is a resident of Sangkrah Pasar Kliwon, Surakarta, Central Java.

The Head of Criminal Investigation Unit of Banguntapan Police, AKP Anar Fuadi, said that the arrest of the suspect began with a report from Hana Putri Fayza, 19, a resident of Wirogunan, Kartasura, Sukoharjo, Central Java. The UAD student on (23/1/2022) at 17.00 WIB, after returning from college, was surprised because the boarding house door was open. After checking, an Acer brand laptop and its charger disappeared from the boarding house.

"When he left, the victim confirmed that the boarding room key was locked, but when he returned to the boarding house at 17.00 WIB, the victim found that his Acer laptop and charger were no longer in the room. The incident was then reported to the Banguntapan Police," explained AKP Anar, Saturday (29/1/2022).

Furthermore, following up on the report, an opsnal team with a back up unit of Jatanras Polda DIY conducted an investigation around the crime scene. From the results of the investigation, the opsnal team managed to get the characteristics of the perpetrators.

Furthermore, on Thursday, January 27, 2022 at 11.30 WIB, his party argued that he was suspected of being the perpetrator who would return to carry out his actions at one of the boarding houses around the UAD campus.

"After reconnaissance, it turned out that the alleged perpetrator entered his boarding house. When carrying out the action, the personnel assisted him and then ambushed him," he explained.

The results of the initial interrogation of the perpetrator admitted that he had committed theft in a number of boarding houses around UAD campus 4, on January 5 and January 21, 2022. The suspect managed to steal two pieces. The laptop was then sold in the Maguwoharjo, Depok, Sleman and Solo areas, Central Java.

"We are still investigating the possibility of other locations," he explained.

Meanwhile, the perpetrator's modus operandi is to ensure that the boarding house is empty. After confirming that it was uninhabited, he started the action by opening the boarding door using various types of fake keys that had been prepared.

In this case, his party also secured evidence including a Scoopy AB 5234 AC motorbike, which was used when carrying out the theft, two laptops that were stolen and a bunch of fake keys of various types.

The suspect in this case is charged with Article 363 of the Criminal Code regarding theft with a penalty of five years in prison," he explained.