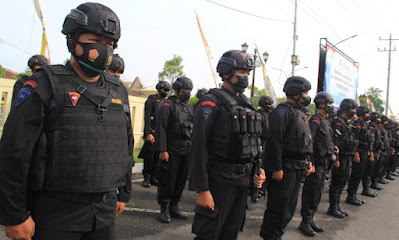 The activity was also attended by Dandim 0729/Bantul Letkol Inf Agus Indra Gunawan and was attended by hundreds of TNI personnel, Brimob and members of the Bantul Police.

The Bantul Police Chief in his direction said that this activity was in the context of securing the 49th PPP birthday activities carried out and JEC in the Banguntapan area.

"Of course it will bring a lot of masses," explained the Chief of Police.

It was explained that later there would be two locations for mass gathering points, namely at Ringinharjo Field and Pleret Field.

The Bantul Police Chief then ordered members on duty at the gathering point location to appeal to the mass of sympathizers for that to be orderly in traffic, such as using motorized vehicles in accordance with applicable law standards and not using non-standard exhaust.

"Also check suspicious luggage, after being in order, carry out escorts to the JEC," he added.

The Bantul Police Chief also explicitly reminded his members to always pay attention to the applicable SOPs in security.

"There is no use of force such as guns and tear gas that is not in accordance with procedures," he stressed.

"Let us intend this security activity as worship," he concluded.